The artificial lakes (mesocosms) consist of 24 stainless steel tanks (2800 l), which simulate shallow lakes. The lakes were established in a standardised way in 2003 and there have been no changes in either set-up or biology since the establishment. At that time 30 cm standard lake sediment was added to each tank as well as a 1-m water column, which was inoculated with a natural freshwater community of algae, small animals, zooplankton and sticklebacks from both nutrient-poor and nutrient-rich lakes. Submerged macrophytes were introduced together with the sediment. The mesocosms are treated with three temperatures and two nutrient levels yielding four tanks with the exact same treatment combination. Heating is done with electrical heating elements placed at the bottom and, depending on season and treatment, the heating follows the IPCC’s A2 scenario of 2.5 to 6.6 °C above the unheated temperature (control). 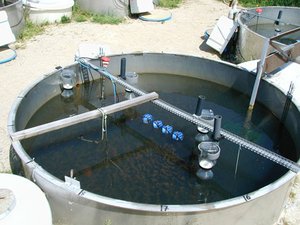 The mesocosms are used for climate-related short-term and seasonal experiments with animals and submerged macrophytes. The climate changes cause insects to fly (emerge) earlier than normal. In spring, insect traps have been placed to catch the emergent insects (Photo :Lone Liboriussen).

Since the establishment in 2003 the mesocosms have been used in a number of EU research experiments, among others EUROLIMPACS and REFRESH, and within the framework of the Villum Kann Center of Excellence CLEAR.

The 12 stream flumes are each 12 m long and 0.6 m wide, allowing simulation of conditions realistic for small streams. Water flow and flow speed in the flumes can be regulated and factors such as nutrient concentrations, temperature and sediment conditions altered, allowing the undertaking of different types of experiments to find the answers to a number of scientific questions. Moreover, we can direct both groundwater and stream water to the flumes.

Conceptual design of the stream mesocosms (flumes) running in either flow-through mode (only stream water / tap water pump), recycling mode (recycling pumps only) or in a combined mode (all pumps) to maximise current velocity.

In the 2014 experiment the stream flumes will simulate the effects of three different stress factors on the stream ecosystem (low flow, eutrophication and sedimentation of fine-grained material). This experiment is part of a large-scale EU project, MARS, investigating the impacts of multiple human-induced stress factors on freshwater ecosystems. The effects of the different stress factors will be assessed from changes in structural elements such as bottom-dwelling invertebrates, algae, fungi and functional elements such as primary production, decomposition of organic matter and nutrient uptake. Moreover, the impact of these changes on ecosystem services (e.g. water treatment) will be determined. 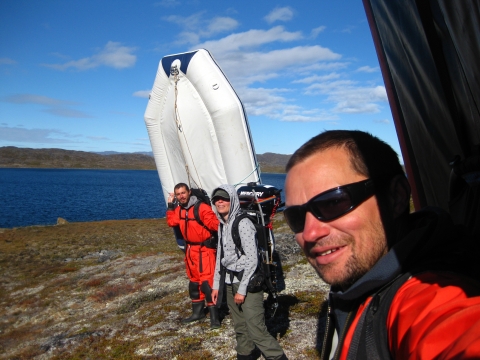 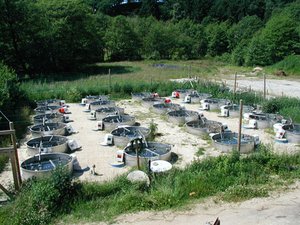 To isolate against both high summer temperatures and frost the experimental tanks and the inlet water supply are dug approx. 1 m into the ground. Temperature sensors, oxygen and pH probes record the physical conditions in the tanks. (Photo: Lone Liboriussen) 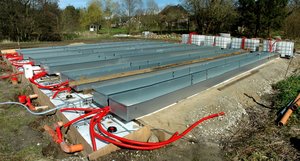 The experimental stream flumes at Lemming field station. The flumes are designed to look like real streams with natural sediment, water flow and small animal communities. The animals were collected from the nearby brook Lemming Bæk, supplying also the water pumped into each flume. (Photo: Daniel Graeber) 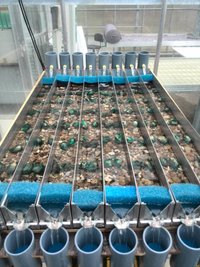 Besides the Lemming experimental facility, we have a small-scale experimental stream flume set-up in our internal greenhouse facility at Silkeborg where 48 flumes each function as a miniature stream. The water circulates in a closed system and each flume contains 12 l water, is 1 m long and 10 cm wide. (Photo: Jes Rasmussen)