Harbour porpoises attracted to oil platforms when searching for food

A large gathering of fish tempts harbour porpoises to search for food around oil and gas platforms, even though the noise from these industrial plants normally to scare the whales away. Decommissioned platforms may therefore serve as artificial reefs in the North Sea.

Harbour porpoises are one of the smallest of all whales and the only whale that with certainty breeds in Danish waters. The harbour porpoise was protected in 1967 in Danish Waters, and researchers from Aarhus University, Denmark, have previously shown that underwater noise from ships, and seismic surveys of the seabed scare the porpoises away.

A brand new study now shows that in some parts of the year there are actually more porpoises searching for food around the largest Danish oil platform, Dan F, in the North Sea than just three to ten kilometres away from the platform.

21 listening stations in the North Sea

The listening stations were left in the North Sea for two years to record all sounds below the surface of the sea, including the noise from ships and platforms, but also the sounds produced by porpoises for orientation and the so-called “buzz sounds” telling the researchers that the whales are actively hunting for food.

“With this study, we’re presenting the first investigation of the presence and feeding activity of porpoises throughout the year around oil platforms, as far as we know,” says senior researcher Jonas Teilmann from the Department of Bioscience, Aarhus University, Denmark, who headed the investigations.

The new discoveries have just been published in the British journal Ecological Solutions and Evidence, and the results from the many data surprised the researchers.

“During the six months from July to January, we heard more porpoises searching for food around the two installations, the Dan-F platform and the Ragnar well, than we did in control areas located 6 and 25 kilometres away from Dan-F. This was even as high as the highest porpoise activity we have seen for Natura 2000 sites in the inner Danish waters,” says Jonas Teilmann.

According to the researchers, the installations act as natural reefs where porpoises are provided with favourable living conditions as numerous species of plants and animals settle on the structures and provide hiding places and more food to the fish. Moreover, fishing is prohibited within a radius of 500 metres from the platforms why the seabed is undisturbed from trawling.

The researchers cannot answer the question of whether the porpoises slowly get used to the noise from the drilling platforms, but it is clear that the motivation for finding food is greater than the deterrence effect of the noise.

“Our data show that the porpoises ignored the annoyance of the underwater noise to exploit the greater availability of food around the fixed installations,” says Jonas Teilmann.

Should artificial installations be left in place?

Especially during the period from July to January, it is important for the porpoises to consume as much food as possible in order to build up a solid layer of blubber that can bring the animals through the cold winter. It is also during these six months that the mothers need energy so they have sufficient milk for their calves.

In contrast, the researchers found that there are far fewer porpoises searching for food around the artificial installations in the period from February to June.

“The signals from porpoises were far less frequent during this particular period, but the buzz sounds revealed that the porpoises still searched for fish around the Dan-F platform and the Ragnar well from February to June. The noise from the platform is the same all year round, so we interpret the absence of porpoises as a change in the behaviour or the presence of fish,” says Jonas Teilmann.

The researchers recorded sounds from porpoises around the clock and could therefore hear that the whales were more actively searching for food at night than during the day, as far as 800 metres from the Dan-F platform.

This came as a surprise to the researchers, but they know that light lures zooplankton, squids and fish up into the upper water column at night. This initiates an efficient food chain that ends with the porpoises. This could explain why the Dan-F platform was especially attractive at night, while the day activity was higher at Regnar, where no light was present.

The OSPAR Convention, which protects the North Sea, requires that all decommissioned oil and gas installations are removed from the North Sea. However, the researchers are now pointing out that the old installations may be left to serve as new artificial reefs in the North Sea, the so-called “Rigs-to Reef” concept. Platforms and other installations can increase the diversity and biodiversity in areas that have been destroyed by trawling or where the original stone reefs have been removed and used for construction projects on land.

The studies were financed by Total E&P Danmark A/S. 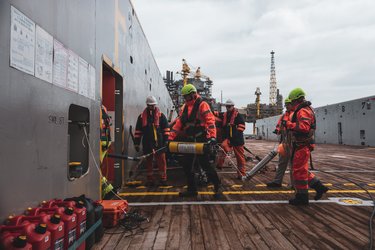 Autonomous acoustic recorders placed on a long string
attached to a surface buoy. Here the autonomous acoustic
recorders are lifted through the side door of a large vessel.
The oil and gas platform is visible in the background. Photo:
Mads Schmidt Rasmussen. 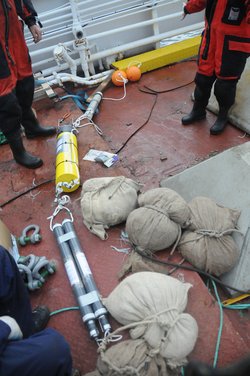 A string with listening buoys is ready to
be deployed in the sea. The bag, which is
made of biodegradable hessian, is full of
pebbles and serves as an anchor. From the
surface, the researchers can acoustically
release a hook to the anchors, bringing
the recorders to the surface while the bags
remain on the seabed where they dissolve.
Photo: Karin Clausen.