Climate has changed throughout the history of planet Earth, but the current warming trend is of particular significance because it is primarily a result of human activity, and it is proceeding at an unprecedented rate. We need to study the consequences of this warming for our ecosystems, and an emerging field of research is using museum and citizen science data to document climate-change mediated phenological and biological changes. The past approximately 10 years have seen an increasing number of  publications on this topic, but relatively few studies have focused on insects, and most have been on butterflies. 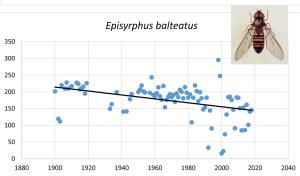 A recently published study explores the phenological response by 37 species of Danish hoverflies to continually rising average annual temperatures by analysing >50.000 museum specimens and citizen science observations covering the period from 1900 to 2018. Hoverflies (Diptera: Syrphidae) are a conspicuous element of the Danish insect fauna. They are active from early spring to late summer, and they are well-known for their great maneuverability – hovering in mid-air, or darting forwards or backwards – for which they have earned their name. They are well known also for their mimicry with yellow jackets, bees and other aculeate wasps, and they deliver ecological services when the adult flies pollinate various flowers, and when larvae of some species consume large numbers of aphids.

Moreover, the study demonstrates that small changes in the average annual temperature may have large and swift effects on our insect fauna. In the period between 2000 and 2018, the hoverflies with significant negative correlations have on average advanced their phenology by more than 11 days, while the average annual temperature in Denmark has risen by less than 0.25 °C. These accelerated early observations for hoverflies are more pronounced than what has been reported in previous studies on butterflies and bees. The earlier emergence is best interpreted as a likely response to the ongoing climatic warming.

The possible impact of the length of the data series on the regression analysis was explored by dividing the species into four groups depending on how far back in time we have data: ultra-short series (with data from 2003-2018), short series (data from 1998-2018), medium series (data from 1980-2018), and long series (data from 2018 to before 1980). The length of the series appears to have an effect on the results as 66% of the long series (10 out of 15 species) showed a statistically significant negative correlation, while for the shorter series less than 35% showed a statistically significant negative correlation. This highlights the significance of having extensive series of either physical specimens or reliable observations, which underscores the importance of having long time-series in the collections of our natural history museums.

Rapid changes in the emergence of hoverflies may lead to a phenological mismatch between pollinators and flowers and an associated reduced reproduction success for the plant, or between the onset of oviposition and the availability of sufficiently large aphid populations to sustain the hatching larvae. Unfortunately, knowledge of Scandinavian hoverfly-plant interactions and impact of hoverfly-mediated pollination is mostly anecdotal, which calls for more comprehensive natural history studies even in one of the most well-explored regions of the world.