Department of Bioscience, Silkeborg, is running an experimental field plot on Djursland, the so called Kalø experimental plot. 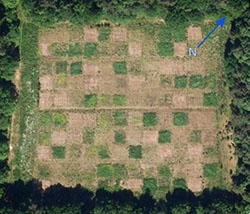 Airphoto of the experimental area, spring 2006.

The experiment was set up to investigate the combined effect of low doses of pesticide and nitrogen on grassland communities.

The experiment was established in 2001. Before sowing, the area was deep ploughed down to 60 cm. Thirty-one species were sown in spring 2001. The species selected were grassland species covering different life form strategies (CRS strategies sensu Grime). 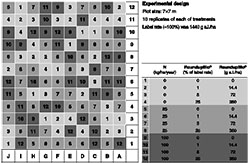 For the herbicide applications, spraying equipment for experimental applications is used. The beam is 3 m with 0.5 m between the nozzles (Lurmark Lo-drift LD 015 Green nozzles with a pressure of 2.0 bars). Fertilizers are spread by hand. The plots were treated by glyphosate for the first time on 24. August, 2001. Since then, it has been treated with herbicide and fertilizer once every year in spring (mid-ultimo May).