For 25 years, researchers have been collecting massive quantities of data on climate change in Greenland. Now the data is to be available to upper secondary school students through online courses.

What happens to flowers and insects when the snow melts earlier and earlier in the Arctic? Or musk oxen, how do they react? And how do conditions change on land when the ice retreats in the many large fjords?

In future, upper-secondary school students will be able to analyse their way to answering these questions.

More than 25 years have passed since a group of researchers established a research station at Zackenberg in Northeast Greenland. The aim was to obtain a thorough analysis of the biological, chemical and physical conditions in an area of the Arctic untouched by humans.

Since 1995, a number of researchers have travelled to the high Arctic every year to study the vegetation, animals, weather, sea, lakes, glaciers, in fact everything between heaven and earth they can measure.

Later, these activities were expanded with a similar measurement programme at Nuuk and Qeqertarsuaq (Disko) in West Greenland.

This is through the so-called GEM programme. GEM stands for Greenland Ecosystem Monitoring, and every year the programme sends approximately 70 researchers into the field at the three sites in Greenland.

More than 2,000 different parameters are collected at the three locations. All the data is available in a database.

So far, approx. 97 million observations have been taken – a treasure-trove of data with a very long time frame. A data set that is unparalleled for other parts of the Arctic. 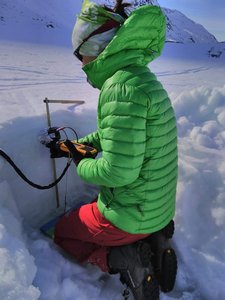 Measurements in snow: Approx. 70 researchers come to the areas near Zackenberg in Northeast Greenland, Nuuk and Qeqertarsuaq (Disko) in West Greenland, where they measure more than 2,000 parameters. During the annual snow survey, here in Kobbefjord, researchers measure snow depth, density, temperature and structure. (Photo: Asiaq)

Data shows that the permafrost is slowly disappearing

"The many observations have given us researchers a unique opportunity to understand what’s happening in the Arctic in a warmer world, and how different elements affect each other," says Professor Torben Røjle Christensen from the Department of Bioscience and the Arctic Research Centre at Aarhus University, who is heading the GEM programme.

Researchers have shown that the permafrost in the soil is slowly disappearing, and that the active layer, which dries out in the summer is becoming deeper and deeper. And they have measured how long periods of extremely heavy rain and snow affect the ecosystems.

This applies to many aspects, from musk-ox reproduction to the carbon uptake in the tundra, and thus the ecosystem's exchange of the greenhouse gases, carbon dioxide and methane. 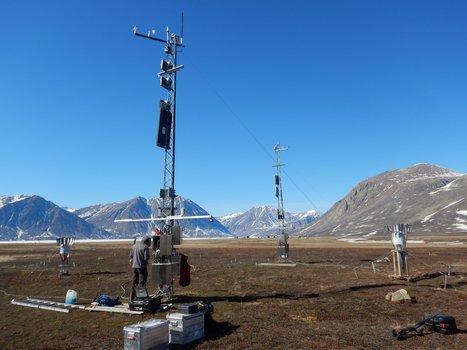 Measuring instruments in Kobbefjord: The GEM programme examines the effects of climate change on water, on land and in the air through studying ecosystem processes. Automated measurement stations collect year-round data, and the GEM programme has some of the longest Arctic time series in the world. (Photo: Kirsty Langley)

From science to teaching

Even though we read about climate change every day, very few of us have insight into what is actually happening in the Arctic.

There is a lack of climate-relevant teaching material for natural science subjects in youth education programmes.

A brand-new project 'Virtual journey in Arctic ecosystems – delve into climate change' is putting this right.

The teaching project is supported by the Novo Nordisk Foundation and is based on input from 80 upper-secondary school teachers, who have indicated what material they need specifically to provide good climate-related teaching in biology, natural geography, chemistry and basic science courses.

Through the project, upper secondary school students throughout the Danish Realm are allowed to use the many measurements from the GEM programme to examine how climate change affects Arctic ecosystems.

"We’re making the many measurements available to upper secondary school students, so that they can make their own analyses and gain new knowledge and insight into the climate change happening right now," says Torben Røjle Christensen.

The students have access to up-to-date teaching material with the latest data. For example, they can access data from sensors that measure the temperature every hour year-round.

They can then link this information to anything they wish to study – e.g. methane exchange from the tundra, snow cover, flowering, number of musk oxen or whatever.

With the help of drone recordings, the project is also developing a kind of 'Google Street View'; a 3D model so that the students can walk around in Greenlandic nature virtually.

"In this way, we hope to bring science directly into the classroom, give students a grounded understanding of climate change and perhaps even inspire some of them to embark on climate research themselves," says Torben Røjle Christensen.

Fact box: More about GEM and the project

The course material has been developed in both Danish and Greenlandic and can be used by upper secondary schools throughout the Danish Realm. The project includes an E-book, story maps and exercise guides, so that students can make their own field studies in Denmark and Greenland.

The three-year project is being supported by the Novo Nordisk Foundation and is a collaboration between Aarhus University, Frederiksborg Gymnasium and HF and the Greenland Institute of Natural Resources.

The GEM programme is based on five basic programmes, which together cover all aspects of the ecosystem, from glaciers and ice caps, over the ice-free land areas and on to the coastal marine environment:

The field season usually runs from April to October, but many automated systems mean that snow cover, meteorology and hydrology are monitored all year round.

The long time series of the monitoring programme make it possible to study annual variations and long-term trends in the Arctic ecosystems, as well as to identify feedback mechanisms and the resilience of ecosystems to climate change.

The GEM programme is also central to fulfilling the Realm’s obligations in relation to the Arctic Council's monitoring programmes for the environment and climate (Arctic Monitoring and Assessment Programme, AMAP) and biodiversity (Conservation of Arctic Flora and Fauna, CAFF).